Want to use @Azure Blob Storage with Akamai CDN? http://blog.geuer-pollmann.de/blog/2015/03/12/accessing-microsoft-azure-blob-storage-with-g2o-authentication/

This article explains how to securely, and with little effort, expose files in Azure Blob Storage towards the Akamai content delivery network. A proxy app (based on ASP.NET Web API), running in an Azure Cloud Service, checks G2O authentication headers, and then either redirects the CDN to the storage service directly, or fetches the data from the back.

In this proof-of-concept, we’re going to integrate two pieces of technology together: Microsoft Azure Blob Storage, and the Akamai Content Delivery Network.

Below you can see the two storage account keys associated with ‘cdndatastore01’. 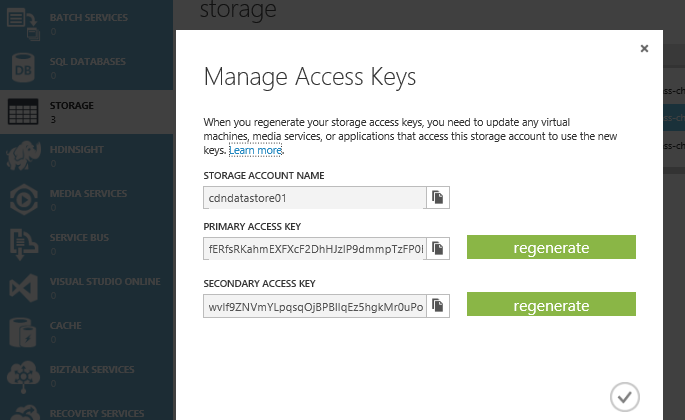 Let’s say we have two containers called ‘public’ and ‘private1’ (which are, well, publicly accessible and privately locked down), and various blobs in these storage accounts:

When we look at the URL of a blob, it consists of the following parts:

As a result, my public image is now accessible at https://cdndatastore01.blob.core.windows.net/public/data/somePublicImage.jpg:

An unauthenticated GET against my private image https://cdndatastore01.blob.core.windows.net/private1/someLockedDownImage.jpg only gives me a 404:

For details around shared access signatures, check out these great articles. Suffice to say, that I added a policy to my container with the identifier g2o, which you can see being referenced in the &si=g2o part of my SAS.

A content delivery network (CDN) is a large network of HTTP cache servers, distributed around the globe. When you fetch a file from a CDN, the DNS routes you to the nearest ‘edge node’ or ‘edge server’ in the CDN. If not already cached, this edge node then fetches the original file from the ‘origin server’. This origin server usually is some web server where the original file assets are stored.

In Azure, there are various services where it can make sense to deploy a CDN in front, to reduce traffic on these servers: Compute services such as Azure Cloud Services, or Virtual machines, Azure Media Services Origin Servers, or Azure Blob Storage.

Microsoft Azure already comes with an included CDN, which you can put in front of your cloud services or blob storage.

The term ‘G2O’ stands for ‘ghost to origin’ or ‘global host to origin’ authentication, and is a mechanism for enabling an origin server to authenticate the inbound request from the CDN’s edge node (ghost). As I said, Azure Media Services support G2O, as well as other libraries (such as the G2O module for nginx or the an IIS Module from the Akamai Community). In essence, G2O defines HTTP headers which have to be added to the request, and 5 different cryptographic algorithms to compute these headers.

After cryptographically processing the input from the X-Akamai-G2O-Auth-Data header and the URL’s local path with the cryptograhic key associated with the ‘nonce’, the resulting cryptograhic value is tranported in the X-Akamai-G2O-Auth-Sign header. (I resist to call is a ‘signature’ because it is a symmetric system, not offering data origin authentication, just message integrity and peer entity authentication.)

The five G2O algorithms are based on pretty ‘conventional’ crypto, but for just keeping the egress load on origin servers low, it’s certainly OK. Have a look at my test vectors for how these strings look like.

After defining the protocol foundation, we can now focus on the actual solution: 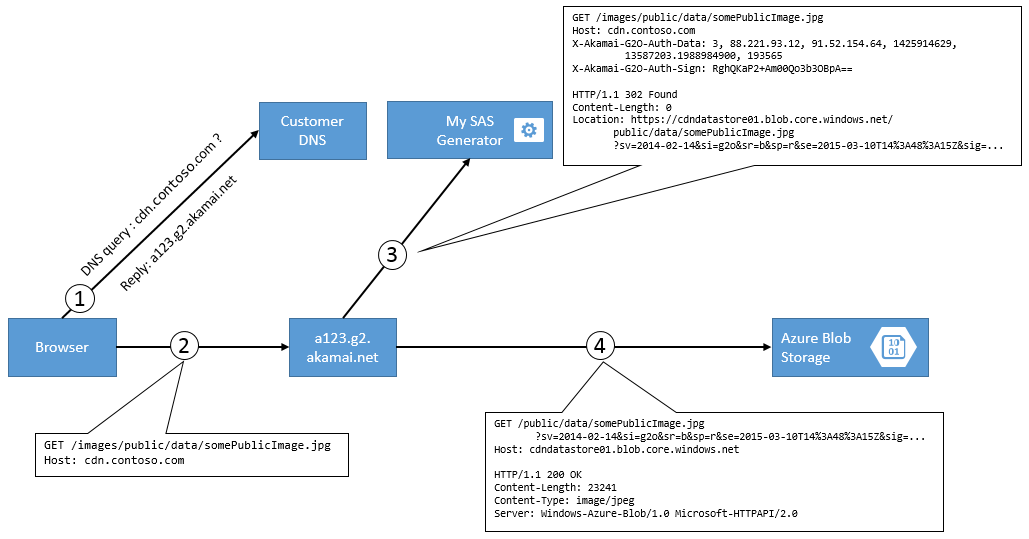 Simply speaking, we deploy an SAS generator proxy app. Then in Akamai, we configure our SAS Generator Service as origin, and turn on “Redirect Chasing”. When clients get a file from the CDN, the edge servers attempt to fetch the files from our SAS Generator Service, which authenticates them using G2O and redirects them to blob storage, with an SAS URL. 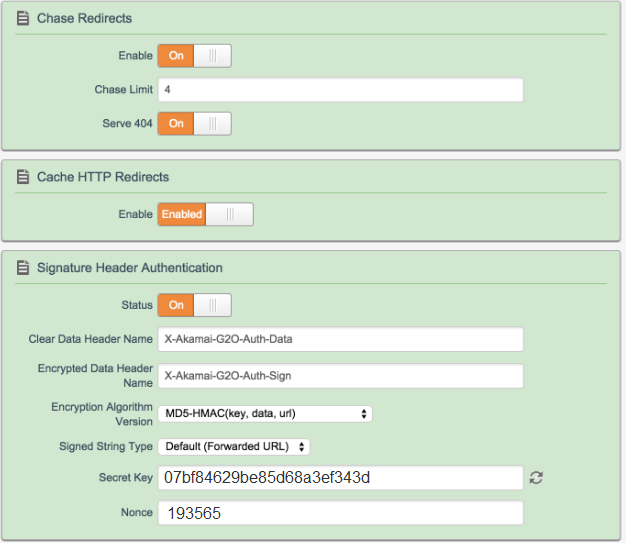 In order to check whether an inbound http request is permitted, the OWIN middleware needs access to the cryptographic key material. You must supply a Func<string,string> keyResolver handler, which gets an Akamai ‘nonce’ (key identifier like "193565") as input, and returns the key (like "07bf84629be85d68a3ef343d").

As a result, the G2OAuthenticationHandler.cs issues an AuthenticationTicket with various claims containing all the G2O validation data. The ClientIP, i.e. the IP address of the actual client itself, is currently not validated, but the implementation could easily be extended to support geo-fencing scenarios (if you believe an IP address still has meaning in this century).

The implementation also contains an G2OHttpClientHandler.cs

With this baby, you can simply impersonate a CDN edge node for debugging purposes.

One aspect hidden in the above code is this ExternalIPFetcher fluff: I often work from home (behind a slooow DSL line), and only god knows what IP address my router externally. All these ancient protocols (such as FTP), and security folks stuck in a last-century mindset, believe that using IP addresses for authZ purposes is a cool idea. Given that I cannot change the world in this regard, I understood I have to have a way to get my own IP address. In my WhatIsMyIP/ExternalIPFetcher.cs repo, I have a small utility class which you can just include per T4Include. Given that I need to pretend that I’m a CDN edge node, I must include the edge’s IP address in the signed data, therefore the above code needs to determine my IP.

For those who care what I do there, I simply fire off 10+ http requests to various whatismyip/checkip/letmeknowmyip/idontgiveashit services on the Internet, and whoever returns first is my authoritative answer, no voting or double checks. Sounds pretty secure, hm?

The solution comes in two flavors, PaaS and IaaS. The proper way to run this is to deploy an Azure Cloud Service with the G2OWorkerRole and have peace of mind, multi-instance across fault domains, and update domains, etc. For the old dogs (whom I can’t teach PaaS tricks) or for developers who simply want a console.exe to step through, there’s the G2OSelfHost option.

Below you can see the snippet how we need to configure the solution. You need to set the g2o_nonces and the g2o_storage strings (either in the cloud service’s cdcfg file, or in the <appSettings> of the app.config):

Having multiple symmetric keys valid at the same time enables you to do some poor-man’s key management, where you roll over between different keys. The g2o_nonces string is a JSON object, which just maps nonce values (key IDs) to the keymaterial, which is in this semi-hexadecimal form.

The g2o_storage JSON string is an array of JSON objects:

Each object has three properties:

The CdnController implementation is actually quite straightforward. The [Authorize] makes sure we enforce G2O authN. We crack the URL into different segments (alias to determin storage account, container, and the blob path), check that the storage account and container are listed in config, and then issue the SAS URL.

The enforceProtocolEquality stuff is related to the way how ‘redirect chasing’ decides whether it follows redirects. When running on the local development fabric, we must keep the TCP ports where they were, instead of using default ports.

The CdnController implementation also contains an unused one which directly reaches into blob storage, and retrieves the actual contents from there, instead of redirecting the edge node to blob storage.

When you want to use Akamai CDN for streaming videos, you should definetely consider an Azure Media Services Origin service, given the bandwidth SLAs of that service. In scenarios where you want to expose other assets directly from blob storage to the Akamai CDN, I hope this litte article helps you.

In case you bump into issues, feel free to reach out on twitter/chgeuer or on github, or leave a comment below.

comments by Disqus
Tweets by @chgeuer